Before getting into the technicalities I would like to introduce myself a bit :)

I 'm Alex, a tech geek who likes music and decided to get into beatmaking because call of duty these days sucks :D (no joke ! I had to do something). So here I am, watching yt tutorials, downloading guides, making my research on the available options in order to start making my first "beat" and I decide to go for a maschine mikro mkii, a m32 keyboard, an apollo sound card ( :P), pair of headsets, ableton and everything!

Long story short... we do have a small studio and we are ready to roll! The idea is to use the maschine and the keys in stand alone mode (meaning natively through the maschine 2.0 software), do most of the job there and when ready pass the "maschine scenes" to ableton for mixing... Simple as it sounds... it is not :D Specially if you might want to edit a "maschine sound" in ableton (for whatever reason) and feed it back to machine... To put it clear, imagine the maschine 2 vst functionality in ableton (or any DAW) but without using the vst... pure DAW to DAW communication! But I will leave this for another post... Lets focus on our beloved collection of sounds and expansions packs where we spend money and time on...

I do have some OCD issues, I admit it! But lets be honest... Who does not love a well organized library in machine 2? With types, attributes, characters, THUMBS and everything... I guess all of us... Then why is so hard to do it maschine? Why do I have to use a space smaller than my cellphones screen to import and organize my files? Who have thought of this in NI? There are a couple of UI / UX courses out there that you might be interested to follow... And apart from this... We come to the so called nks format! yeeees! there is a way to organize my stuff... But again... NO! you have to make a special request for the dev kit, explain who you are and what you want it for and get in so many trouble for... organizing your stuff!

Jesus NI! This is next level experience!

I spent some time reverse engineering the file structure of maschine / komplete kontrol, went through the internet for more info, came across nimbank and all... Still not a clean way to edit and organize your library...

Did my research and decided to go on my own. My current approach is to import the library paths in maschine using the standard procedure and the have a GUI editing / mass editing the library fields. Its only a few days I 've been experimenting with it but it looks promising. I m able to retrieve info from the kontakt library and edit it as required.

Am I alone on this? Has anyone done it before? I came across a thread in the forum with an app which is basically a UI for the nimbank api but that was only for MAC and you had to have a 3rd party app and blah blah... I 'm on windows. I would like something cross platform... And something that I dont have to pay 300$ to host it :)

Although I 'm on windows and the easiest way would be to go with a winform app I thought that there might be more people wanting such a tool out there... and I know that mac users are a lot in the music industry. So I 'm giving a try using python and pyQt in order to (hopefully) make it a standalone, cross-platform app :)

I would be glad to have some feedback from you, let me know how you currently deal with tagging your library and if there is interest in the "project" in general.

Personally I have not decided if I 'll make it open or under a small fee but lets hear from you first :) 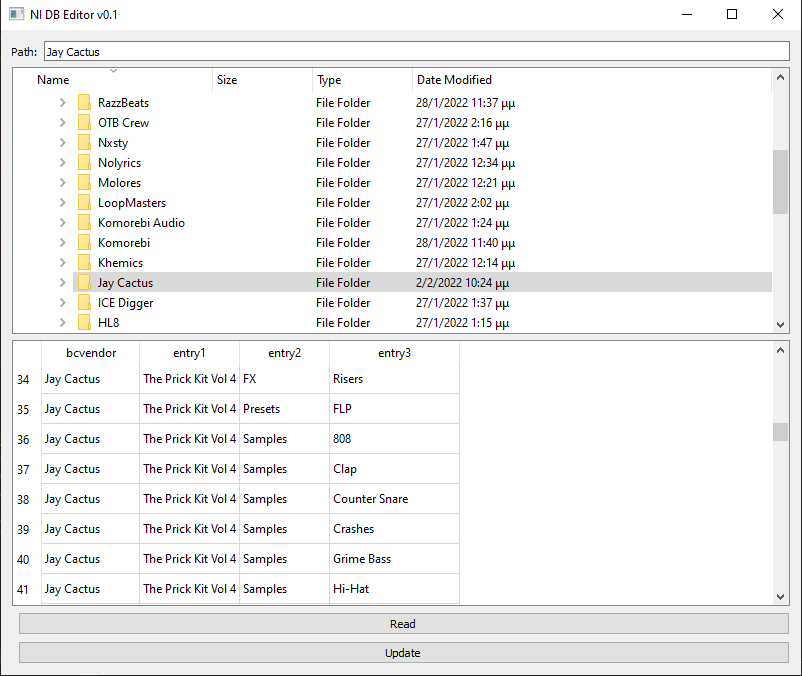 A simple interface where we can dig through our sound packs and easily assign attributes to them...

PS: No, there is no metadata related (into WAVs) with your sounds being imported and removed from your contact user library :)

Sorry for the long post but I thought to give it a try!