I've been using Reaktor 5 as a VST in Ableton Live for many years, and I'd like to update to Reaktor 6.

One thing that keeps me from updating is the apparent inability, when using Reaktor 6, to indicate the path only once to load a group of Ensembles when loading a Live Set that has been saved on another computer.

Almost every single day I use two computers (for various reasons) to work on the same Ableton Live Projects that include many Reaktor instances.

The Projects are shared between the two computers using DropBox.

When loading a Project that was last opened on the other computer, I have to locate the Reaktor Ensembles that were previously saved with the Project, as proposed by the following window. 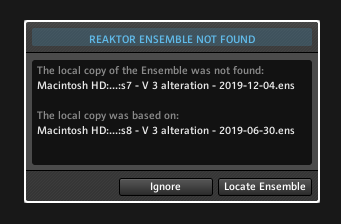 With Reaktor 5, I have to show the path only once for all Ensembles, thanks to this second window.

Unfortunately, the second window does not appear when using Reaktor 6.

This means that I would have to locate between 20 and 40 Ensembles separately (depending on the Project) each time I open a Project that was last opened on the other computer (several times a day).

One day, a few years ago, I read the user manual and searched the forums for a solution to this problem, without success.

If there is a trick for showing the path only once when using multiple instances of Reaktor 6 in Live, I’d be happy to know, as it would allow me to use the upgrade that I purchased.

It’s quite possible that there is a simple solution that I completely overlooked !