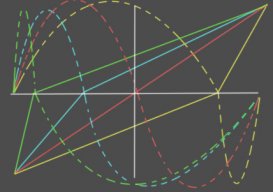 One running at 1 hz(top) , the other ar 2 hz , they never start on sync even after resetting Reaktor engine .

A constant of 1 or gate ( value 1 ) into the impulse fm Amp input doesn't make any difference.