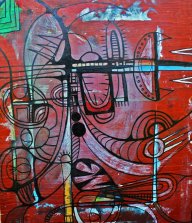 It's not made yet. But there are a AM Eurorack module spitting out radio signals and it would be a very cool module to sample from, crackles and swish swoch sounds. AM apps does also exist so it should be possible to make one right?

Not many controls, CV in for searching of course.

When I learn more i will begin making one.