Exporting to audio file from Kontakt in Ableton problem. Need a Kontakt wiz'. 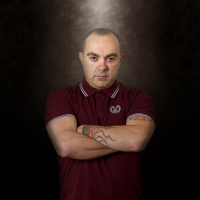 Hi everyone. Who here is a wiz at Kontakt?

This ONLY happens with Kontakt (full version of 6) inside Ableton (I am using 11). This behavior does *not* happen with any other VSTi controlled MIDI track when either frozen & flattened, or directly exported to a WAV audio file.

Attached is an image example of a kickdrum that was originally laid out via MIDI in the piano roll of Ableton live 11. The MIDI "draw" is snapped to the grid perfectly (shown above the audio file) but when I either flatten & freeze, or export out as an WAV audio file, there is this ever-so-slight amount of space before the full audio sound plays (the sound is not cut off, it's as if it shifted to the right ever so slightly and is not snapping directly on the grid like the other VSTi's do when they bounce to an audio file format. This slight space actually reminds me of the behavior MP3's have in the beginning of their files (an option Ableton does not have so this isn't that)

The shift is visually noticeable as you can see, but not so far shifted that it can be noticeable to the ear, but the fact of the matter remains, is that it has moved during the MIDI to Audio conversion. And this is bothersome. This is happening with every library within Kontakt not just the one I used to make the kickdrum example for you all to see.

My workstation is strong, and I never have any latency issues with any processing. And as I said all my other VSTi's snap to grid perfectly fine when flattening & freezing or direct from MIDI to audio WAV file export.

So please if there is anyone in here can 1) explain this odd export behavior, and 2) how can I make this stop happening and allow Kontakt to behave like the rest of my VSTi's when exporting to an audio file?

thank you for any help that is offered.