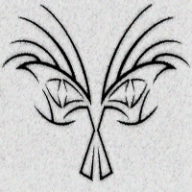 I want to know if an array in core can load different data on a per voice basis.

I'm working on an experimental modulation concept and I want to load up an array that will have a different set of values on a per voice basis.

Can core array's do this?