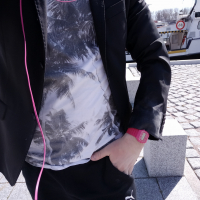 Repeatedly removing the plugin from memory and reloading it with the same configuration (by deactivating the track, closing/reopening the project or restarting cubase) results in randomly either correct pitch or about 1 1/2 semitones too high (as in pretty exactly the shift that happens with mismatching 44.1kHz and 48kHz audio).

Is there any chance this bug is going to be adressed in the next couple of months – since it has been there for some time now – or is it going to stay that way, in which case I would replace Super 8 in my projects.