Layering and timing the orchestration in Kontakt. 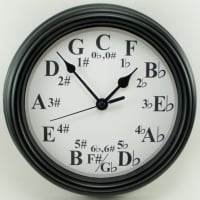 Please, oh, please, is there a way to time 16 voices so that they appear in the composition as I go playing them all along the keyboard simultaneously, but only when planned ?

I can set both, a keyboard range and a velocity envelope for them to trigger (Roland Fantom 8 as MIDI controller), but how could I ask a particular voice to sound after a given time (DELAY, from 0 to 1023 in the Fantom), after releasing the keys (KEYOFF-NORMAL, KEYOFF-DECAY), or just when key is held and a given time has elapsed (HOLD, via time or note lenght) and even a mixture of them (a time after KEYOFF).

I am accustomed to the Zen-Core tones from Roland, capable of huge orchestrations thanks to all those specifications, and very much would like to find a solution for other third party patches, like those in the Komplete series.