"One or more Kontakt instances cannot be recalled correctly, perhaps due to missing content. Please open any Kontakt instance in your host, Komplete Kontrol or Maschine to resolve the issue." Here's how it happened:

I was opening some old mockups. One of them I opened and that's when the content missing message (I'll call this "message") appeared. Once the message appeared, I instantly knew it was because this mockup I opened used Cinematic Studio Strings (I'll call this "CSS") v1.5. Only a few days later did v1.7 release. I clicked "OK" and I got in, but since I didn't want to cause any problems (little did I know it was too late), I quickly got out of there.

Then I opened another mockup (again, just checking out my old stuff) that uses CSS v1.7. I was playing through and there was no sound. About a minute later, after freaking out, I checked Kontakt, and saw that instead of the patch "CSS 1st Violins" loaded, it was "Empty Multi". Before I could click anything, a similar message appeared again, this time in Kontakt of course. 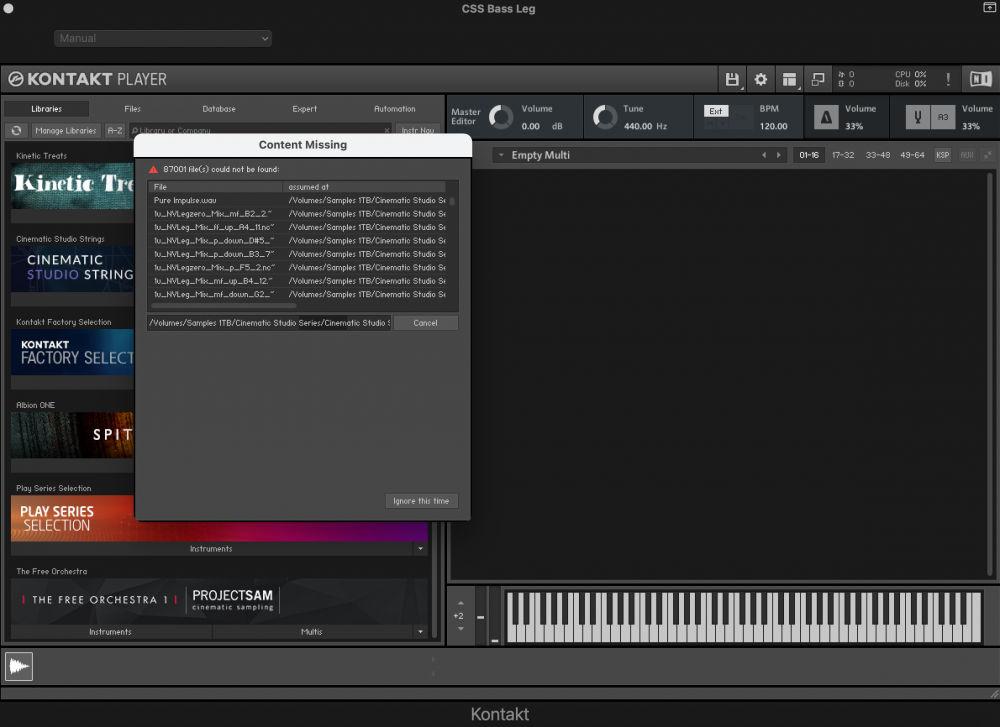 External drive: Apparently the mishap from paragraph 2 duplicated my CSS folder into a "Users" folder. It led to "Shared" and then to the entire CSS family. So I deleted it. My original CSS folder was still there (and still is right now).

Native Access: CSS needed to be repaired so I got that done without a problem.

Opened DAW again, same message, same everything. Found out some people had the same problem, so I did what they did to fix it, like re-saving, checking Native Access. No fix. *dying inside* "Ignore this time" prompts an infinite beach ball.

I tried the Kontakt sample-searching again and here we are. It literally stops every 10000 files (why the attached image says "87001 file(s) could not be found") so no way this is gonna finish overnight. Yikes I hope I'm not angering the NI guys for mentioning Cinematic Studio Strings. Sorry guys, I gotta be honest.

Should I bite the bullet and get Kontakt 7 (do I need to delete current Kontakt first)?

Any help would be much appreciated, thanks.