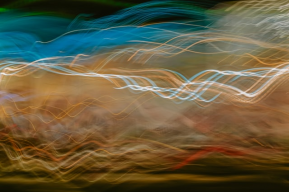 It seems the latch might be your best friend in turning off a module. As shown below I installed latches on all inputs except the reset. The clock for the module is turned of externally but without the front latches a lot of things were still active. It seems the latch cannot send out an event with it's clock stopped. So any additions or other math functions are not triggered and do not perform calculations. The cpu dropped from 30% down to 24% after adding the input latches compared to a previous turned off method without latches. This is a screenshot after the input latches were added. The adder and log module already have built in latches. The SR bundle distributes the audio clock. After stopping the clock and using the debug tool everything was dead still. Before adding the latches the adder and other things were still running so the latch must no longer produce an event to trigger any downstream math.

This is the insides of the adder module showing the serial clock. 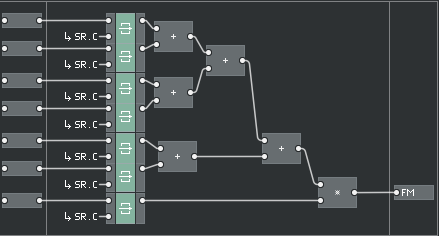 Let's have a quick look at the inside of the latch and see why this works. The write module receives the input and the read module will not send out an event unless it receives a clock event. Since the cpu dropped 6% it seems positive proof that within reaktor, everything must receive an event to start performing a function. So stopping unnecessary events is key to reducing cpu. 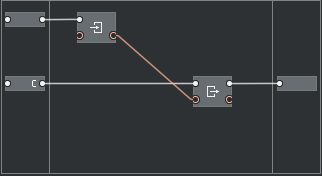 The above module is driven by an envelope generator. I have rigged the envelope generator to stop the clock of this module during the final release phase. So why leave this running when it produces no sound! It's important to realize the values of the memory are maintained when the clock suddenly stops. This can leave outputs with a non 0 value. So in this system the outputs are muted by the same event that stops the clock as shown below.

Notice the pickup distribution bus labeled stp1. stp1 is a 0 value sent from the envelope generator when it decays below -60db. Since this is the main audio output module it's also the first to be zeroed before the clock actually stops on the next cycle. In reality the audio is already reduced by 60db and terminating it does in fact create a spike but is very hard to perceive. As a side note, stopping it early when you can't hear it also saves cpu. So being practical helps too.